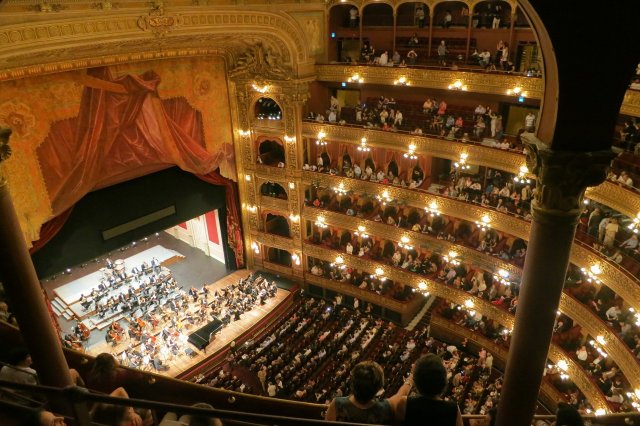 “I like to describe Videogames Lives as having all of the power and emotion of a symphony orchestra combined with the energy and excitement of a rock concert mixed together with all the cutting edge visuals, technology, interactivity and fun that videogames provide,” said Videogames Live composer Tommy Tallarico in a interview from the DVD release of Videogames Live.

Videogames Live kicked off on November 5th at the Pabst Theater in Milwaukee. The Milwaukee Symphony Orchestra played music from Super Mario Brothers, Halo, God of War, World of Warcraft, and other popular videogames. One neat aspect of the concert that stood out to me was the interactive elements of the show.

Prior to the event, a Guitar Hero competition took place in the lobby, and during the show, the winner got to come on stage and play the Aerosmith song “Sweet Emotion” alongside MSO and Tallarico. The winner was a young guy, and he had to score 250,000 points on expert to qualify for a prize package containing Videogames Live memorabilia.

Highlights for me were the dueling flute segment from Legend of Zelda that reminded me of the dueling banjo scene in Deliverance. The orchestral style performances for Halo, the rock and roll rhythms of Megaman, and a Super Mario Brothers flute piece covering all of the Italian plumber’s traditional platform games in chronological order.

Some of the other musical performances involved an opera singer for the God of War segment. A videogame series based loosely on Greek Mythology, and featuring epic set pieces. To coincide with Tron Evolution a music segment depicting the old arcade game appeared in the show’s lineup. Another piece involved nostalgic videogames such as Pong, Centipede, and Asteroids.

Unexpected surprises that I didn’t know would be in the show included a black and white video from 1968 showing the father of videogames Ralph Baer demonstrating how to play Pong for the first time. Baer even made a performance via Skype at the show. Another thing I didn’t know about was the videogame costume contest that happened before the show. A little kid dressed as a grunt from Halo won 1st prize.

Other neat quirks from the show that made me laugh happened between performances. Such as flash videos of videogame crossovers like Sonic vs. Pac-Man, Grand Theft Auto vs. Frogger, and Mortal Kombat vs. Donkey Kong. Two other highlights were a YouTube video of the top ten worst videogame voice acting performances, and a Frogger competition on stage.

What most impressed me about Videogames Lives is that the show is not targeted just to hardcore gamers, but to non-gamers as well. Many people are probably not familiar with the videogames shown here, but with the visual elements of the concert, I feel that non-gamers can gain a new appreciation for the videogame medium. As well as discover a whole new genre of music that they didn’t even know existed.

Overall I enjoyed Videogames Live, and my only complaint is that some of my favorite videogames series like Metal Gear Solid weren’t a part of this show’s lineup. I would definitely go again, and I recommend it to everyone. It was a concert experience unlike any other, and incredibly entertaining.