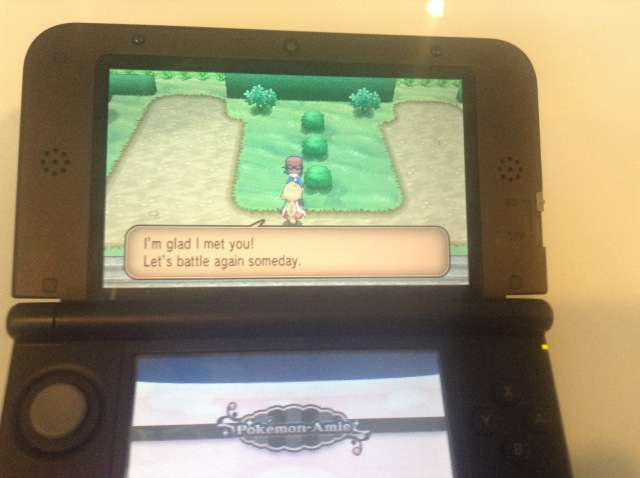 Round two of the portable videogame war between Sony and Nintendo is quickly approaching. Nintendo, the current champ of portable gaming, is releasing the 3DS their successor to the Nintendo DS on March 27th. While Sony recently just announced the Next Generation Portable (NGP) the code name for their follow-up to the PSP. Both systems offer compelling new gameplay experiences, and are vastly different from each other. However, only one handheld can come out on top. Which one will reign supreme the 3DS or the NGP? Here’s a side by side comparison to help you decide which system is right for you.

The Nintendo 3DS is the first portable gaming device to offer 3D gaming without the need for dorky 3D glasses. The system is powerful with most games displaying graphics at levels between Wii, and PS3/360 quality. The design is very similar to the DS, but the handheld is packed with new features like analog control, motion/gyro support, the ability to watch 3D movies, and even a 3D camera. Some of the other new features include a virtual console shop similar to the Wii’s where you can buy old Game Boy games in addition to new software, and a service called Game Coins that  rewards users who carry their 3DS with them as they travel during the day.

Another plus for the 3DS is that support from third party developers is the strongest Nintendo has ever had. Key franchises like Metal Gear Solid, Resident Evil, and Assassin’s Creed will all be available for the system. As well as Nintendo’s own strong first party lineup that includes Mario, Zelda, and others. Packaged with each 3DS will be six augmented- reality(AR) cards called  that show of the 3DS tech in creative ways, and best of all the 3DS is fully compatible with the DS’s massive library of games.

The system is pricey. $250 is a lot for a handheld even if the technology is revolutionary. Games will be expensive and most likely range from $40- $60. Also, the launch lineup is pretty weak with no killer apps that scream “buy me!” Super Street Fighter IV and Resident Evil Mercenaries are graphically impressive, but their hardly system sellers. It’s also disappointing that there’s no support for Game Boy Advance games on the 3DS’s virtual console.

One big concern may be long-term effects of playing in 3D. Will it cause eye damage? It has yet to be proven, but luckily the 3DS has a slider that allows you to turn off the 3D if it bothers you. Other things to keep in mind are a short battery life, (between three- eight hours), and the fact that Nintendo will likely release cooler colors as well as revisions to the hardware in a year similar to Apple.

First off the screen is absolutely gorgeous! It’s twice the resolution of the PSP, and the graphics pack a powerful punch. The NGP version of Uncharted comes close to rivaling its PS3 counterpart in terms of graphics. Even better, Sony has fixed the biggest criticisms of the PSP, the lack of a second analog stick, and the clunky UMD format. UMD’s have been dropped in favor of flash-based memory cards that should help reduce load times.

The NGP incorporates new technology that the PSP didn’t have such as touch controls and cameras for the front and back of the unit. Support for 3G, Wi-Fi, GPS, and motion controls are also included. In addition to the new features, a new interface called LiveArea houses all your games, applications, and trophies. Software support is strong with big franchises like Uncharted, Call of Duty, LittleBigPlanet, and many more on the way.

All this breakthrough technology comes at a price. No price has been set for the NGP but expects it to be around $250- $400. Like the 3DS, games are going to be expensive and will probably cost almost as much as console games. With development costs so high game developers are more likely to rely on franchises, and avoid taking risks with new intellectual properties. It is true for the 3DS but is an even bigger concern for the NGP.

Not yet confirmed, but hopefully Sony will do away with the endless firmware upgrades that take forever to download and find a way to extend the battery life. Battery life will be about the same as the PSP making it shorter than the 3DS. Lastly, the size of the unit is pretty big, and won’t fit in your pocket easily. Hopefully, Sony will consider revising it before the launch of the system sometime in winter 2011 or early 2012.

It’s too early to pick a winner, but it’s definitely going to be a portable war unlike any other. Sony and Nintendo may be at war with each other, but their biggest competitor actually could be Apple. The iPad and iPhone both offer a different approach to portable gaming then the 3DS and NGP.  The key advantages Apple has over Sony and Nintendo is the convenience factor of always having these devices with you, the prices of games that range from 99 cents to $20, and not having to devote so much time to playing games. It’s something to consider before committing to a purchase of a new handheld gaming device.

This article originally appeared in the UWM POST. Check out the original article here. http://issuu.com/theuwmpost/docs/post1312011

This entry was posted in UWM Post Newspaper Articles. Bookmark the permalink.